Grandson of Lokmanya Tilak. BA, LLB. Editor of Kesari and Mahratta. Senior worker of Hindu Mahasabha. Managed the office work during the Bhaganagar (Hyderabad) unarmed resistance in 1938. Participated in the 1941 Bhagalpur Hindu Mahasabha session that was banned by the Government. Was treasurer of Maharashtra Hindu Sabha for several years. Raised funds for the defence of Savarkar when the latter was implicated by the Nehru Government in the Gandhi murder. Mediated in the talks between the Nehru Government and the then banned Rashtriya Swayamsevak Sangh (RSS) in 1948. Was imprisoned again for four months in 1950 and again in 1964.

Studied LLB and BA in Miraj and Pune. Settled in Pune. While he was studying in Fergusson College, Pune in 1931, the Government hanged to death sixteen innocent people for violating the martial law. As revenge, Gogate attempted to assassinate Hotson the then Governor by firing shots at him. Was sentenced to seven years imprisonment for this. Released in 1937. Thereafter did LLB and started practicing law. Was imprisoned in the aftermath of the Gandhi murder in 1948. Was member of Hindu Mahasabha. Was member and later Mayor of the Pune Municipal Corporation. Was elected from the Graduates’ constituency to the Maharashtra Vidhan Parishad (Upper House). Was Leader of Opposition in the Maharashtra Vidhan Parishad. Played leading role in erecting memorial to revolutionary Vasudeo Balwant Phadke. Died on 24 November 1974.

Son of Vishnupant Damle of Shirgaon. Savarkar had stayed from 24 November 1924 to 20 June 1925 at Vishnupant Damle’s house when there was plague in Ratnagiri. It was there that Savarkar wrote his English book Hindu padpaadshahi. Became Savarkar’s personal secretary when Savarkar came to Mumbai in 1937. Accompanied Savarkar on his whirlwind tours. Participated and imprisoned in the Bhaganagar (Hyderabad) unarmed resistance in 1938. Arrested in the Mumbai riots in 1946. Was imprisoned for a long time in the aftermath of the Gandhi murder in 1948. Selfless worker of the Hindu Mahasabha.

Hailed from Miraj. Participated and imprisoned in the Bhaganagar (Hyderabad) unarmed resistance in 1938. Worked as Savarkar’s personal bodyguard during his tours. Selfless worker of the Hindu Mahasabha. Was imprisoned and tortured severely (his nails were plucked out) after the Gandhi murder in 1948 so that that he might implicate Savarkar. Bravely withstood police brutality but refused to unjustly implicate Savarkar. Participated and imprisoned during the agitation against the Eucharist Congress held in Mumbai in 1963.

Born 24 August 1872; BA, LLB, started as a lawyer in Satara (Maharashtra); was called by Lokmanya Tilak to Pune in 1896. Was editor of Kesari-Mahratta newspapers for 41 years; was trustee of Kesari trust. In 1916, took the lead in organizing the 60th birthday celebrations of Tilak and collected Rs. one lac for that purpose. After the death of Tilak in 1920, he became one of the foremost leaders of the Tilakites in the Congress. Was a member of the Viceroy’s Council from 1924-1929. Was president of Akhil Bharat Hindu Mahasabha twice (Jabalpur, 1928 and Delhi 1932). Noted litterateur, popularly called Sahityasamrat. Died on 14 October 1947.

Sanskrit scholar; adorned with the titles of Mahamahopadhyaya and Vidyanidhi. Wrote extensively on dharmic issues. For some years, did editorial work in Shridhar Vyankatesh Ketakar’s ‘Dnyankosh’ (Encyclopaedia). In 1926-1927, he produced the first ever Marathi translation of the Rig-Veda samhita. He prepared the rites for shuddhi and wrote an insightful Marathi preface to this work. Gave great impetus to shuddhi movement in Maharashtra. From 1924 to 1933, he was president of the Pune city Hindu Sabha. Later, he formed the Bharatiya Charitrakosh Mandal (Indian Biographical Encyclopaedia Circle) and prepared biographies on ancient and modern personalities. Survived the Panshet floods that submerged Pune by sitting on the roof of the Amruteshwar temple.

Born 28 September 1898. Educated in Pune; secured BA degree in 1920. Worked in editorial department of ‘Loksangraha’ newspaper from 1920-1923. After 1923, did research in typing and printing of Devnagari alphabet. In 1931-1932, made the printing of Devnagari alphabet possible on ‘mono type’. Was secretary of Pune Hindu Sabha from 1924-1930; organized shuddhi programmes. Surveyed riot-hit Mahad in 1928. In 1938, surveyed and reported condition of Hindus under Nizam rule. Imprisoned during the Bhaganagar (Hyderabad) unarmed resistance in 1939. Was secretary of Maharashtra Hindu Sabha from 1940-1945. Imprisoned in 1948 and 1950. Became secretary of Akhil Bharat Hindu Mahasabha in 1950. Organized session of the Akhil Bharat Hindu Mahasabha in Pune in 1950. Became vice-president of Akhil Bharat Hindu Mahasabha in 1975. Published Chitraoshastri’s Marathi translation of the Rig-Veda, Mate’s book on the plight of untouchables, Balshastri Hardas’ lectures in Pune and Savarkar’s collected works. Edited Kaal newspaper from 1940-1955. Started Kaal weekly in 1967.

Born in Pune on 10 February 1898. Studied till matriculation. Initially worked with his father who was a tobacconist. Later did farming. Started printing press in 1922. Published ‘Sangram’ weekly from 1925-1932. Member of Pune Corporation from 1928-1954. Became chairman and later member and Mayor of the Pune Municipal Corporation in 1942. Elected to the Mumbai Legislative Council in 1964. Was chairman of Merchants’ Co-operative Bank for 44 years and its president for six terms. President of Maharashtra provincial Hindu Sabha from 1954-1962. His printing press was burnt down in the riots following the Gandhi murder in 1948. Was imprisoned for four months each in 1948 and 1950. Was president of reception committee during the Hindu Mahasabha session held in Pune in 1975. 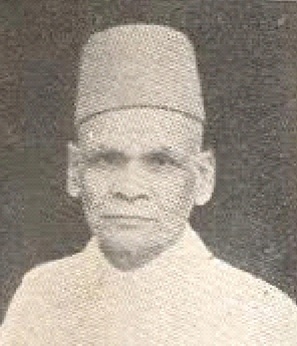 N B Khare
Born in Panvel on March 19, 1884; Father Narayan Balla Khare was a lawyer with an unsteady income. educated at Maratha High School, Bombay, Government College, Jabalpur and at Medical College, Lahore. In 1907 he took his degree in Medicine securing first rank. He won the Dr. Rahimkhan gold medal and another medal for Surgery. In 1913 he became the first M.D of the Punjab University. When he was an undergraduate in the Government College he was asked to write an essay on the "Blessings of British Rule To India". The future Premier of C.P wrote with great gusto…. He gave a vivid account of the curses of British Imperialism and how it was gnawing away our very vitals. The Principal, Mr. Browning read the essay. It was hard for hard meat for him to digest. He became the flaming pillar of wrath. His essay breathed sedition. So he was asked to give an explanation. As a consequence Nationalist journals like Amrit Bazar Patrika and Kesari were not allowed to be subscribed by the library. Imbued with Gandhian spirit he interested himself in politics. He became the trusted lieutenant of Narakesari Abhayankar. H played a notable part in imparting fresh vigour to the Congress movement in Central Provinces.

He was Member, Indian National Congress, 1916-38: President of the former C.P.P.C.C, Harijan Sewak Sangh, Nagpur and Member, A.I.C.C., for several years; Suffered imprisonment for participating in Civil Disobedience Movement; Member, C.P. Legislative Council, 1924—30, resigned in pursuance of the mandate by the Lahore Congress, in 1929; Founder and Editor of a Marathi paper "Tarun Bharat" to carry on Congress propaganda in 1926; Congress M.L.A. (Central), 1935—37; Initiated the Arya Marriage Validation Bill which was later put on the Statute Book; M.L.A. (C.P.), 1937—43; First Congress Premier of the former State of C.P. and Berar, 14th July, 1937 to 29th July, 1938; Formed the Capital Punishment Relief Society to help the Chimur and Ashti prisoners; Member, In charge of Commonwealth Relations Department, Viceroy's Executive Council, 7th May, 1943 to 3rd July, 1946; As a Member of the Viceroy's Executive Council was responsible for placing on the Statute book the Indian Reciprocity Act Amendment Bill and enforcing it against South African Europeans for getting acquitted all the highly placed Indians in Malaya, like Dr. Goho, who were charged with high treason and collaboration with the Japanese, for securing rights of citizenship for Indians domiciled in America, for withdrawing the High Commissioner of India from South Africa, for applying economic sanctions against South Africa and for lodging complaint against South Africa in U.N.O.; Presided over the Annual Session of the Brihan Maharashtra Parishad at Khandwa; Prime Minister of the former Alwar State, 19th April, 1947 to February, 1948; Member, Constituent Assembly of India, July, 1947 to February, 1948; Joined Hindu Mahasabha on l5th August, 1949, and was its President from 1949-51; Member of Parliament from Gwalior, Madhya Bharat, 1952. Was a member of the Maharaja Bagh Club and Indian Gymkhana Club, Nagpur; Vice-President of the All India Hindu Mahasabha, 1954. His hobbies included playing chess and bridge. He wrote books such as "My Defence", "Some speeches and statements of Dr. Khare", "Biography" in Marathi—Vol. I, published in 1943 and Vol. II in 1950.